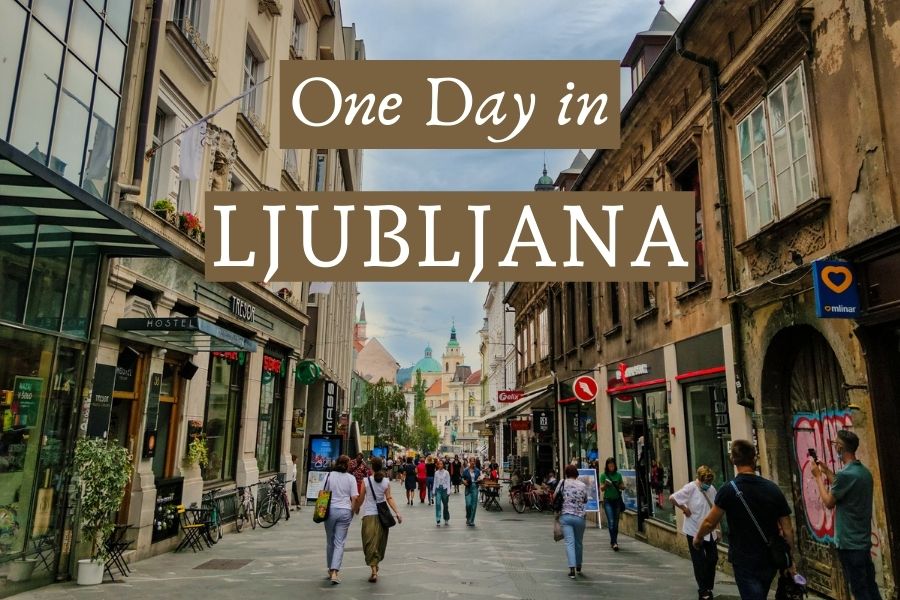 One Day in Ljubljana : 15 Things to do and see

Ljubljana the capital of Slovenia is one of the smallest in Europe with a population below 300 000. Also, the city by area is pretty small and luckily most of the sights are around the centrum. So it’s possible to see most of it within one day when visiting Ljubljana. What to do and see in one day in Ljubljana?

Places to Visit in Ljubljana in one day

Ljubljana is a small charming capital with the highlights of well-preserved medieaval old-town, a castle with panoramic views over the city and some interesting bridges.

1. Climb up to Ljubljana Castle

It’s located right in the heart of the city and basically, it’s the first thing that is seen afar when strolling around the capital. It’s atop of the Castle hill with panoramic views almost 360 degrees. A relatively small hike starts near Vodnik Monument. Within minutes from Ovinki trail to the top of the castle area. When you reach the top of the hill you will have magnificent views of the city and to surrounding mountains.

Wandering around the castle and enjoying the city landscape from the viewpoint is free. However when visiting castle rooms and towers, then there are some additional fees. There are different variations of tickets, depending on what to see in Ljubljana Castle. Fees are in-between 10 to 13 euros per adult. Additional information about different tickets is found here. It’s for sure the main place to visit when being one day in Ljubljana.

It’s located in the main square in the center of the city. The starting point to go particularly anywhere in that city. In the square will be seen Franciscan Church, Triple Bridge, the Castle, Ljubljanica River, Prešeren Monument, and of course the old town. It’s hard to miss that place while strolling around one day in Ljubljana.

13 floors and 70 meters high Nebotičnik is a Slovenian Skyscraper. It’s one of the most prominent buildings and landmarks in Ljubljana. By the time it was built (in 1933) it was the highest building in the Kingdom of Yugoslavia. Right now it hosts shops on the first floors, then some business offices next floors, residential floors and on the last floors restaurants.

There are many bridges over the Ljubljanica river and one of the most famous ones is the Dragon bridge. It’s called that way because it’s decorated with dragon statues. Located near Preseren Square. It’s one of the landmarks in Ljubljana.

What kind of capital doesn´t have any Central Market? If needed some local ingredients or ornaments then this place might be the right place to start. An open-air market is located in Pogačarnev trg and Vodnikov trg squares near to Ljubljanica river. Also in the heart of the city. During the high seasons (mid-march to end of October) there is also an open kitchen, where there are prepared various dishes from all around the globe.

6. Take a picture at the Triple Bridge

In the middle of the Ljubljana flows the Ljubljanica river which is crossed by various bridges. Like previously mentioned Dragon Bridge then Triple Bridge is another well-known overpass in Slovenia capital. It’s right next to the main Preseren Square. It’s called the triple bridge because there are three bridges next to each other.

The Metelkova area was headquarters for the Slovenian Yugoslavia National Army. Now it’s called Metelkova City Autonomous Cultural Centre, where there are different cultural organizations, also clubs, pubs, and street art. It’s just a bit away from the city center area, but it’s a place to see when being one day in Ljubljana.

A square with a park and many famous buildings. Important buildings that face the square: Slovenian Philharmonic, Casino Building, Ursuline Church of the Holy Trinity, and The main building of the University of Ljubljana. Also really close to the city center and the Ljubljanica river.

Old-town is well renovated and there will be a lot of things to see, like Town Hall, Ljubljana Cathedral, Robba fountain. Just wandering around small old-town without getting interrupted by traffic. Strolling on the streets or next to the banks of the Ljubljanica river where there are several cafes, restaurants, and bars.

What to do in Ljubljana in One Day

How to blend in as a local Slovenian? Explore the city with a bike, take your time at coffee shops, and don’t be in the rush.

A modern-looking funicular takes visitors from the ground up to Ljubljana Castle. From there will be stunning views to the old-town and to the mountains. The ride takes about one minute and the one-way cost for adults is 4 euros.

11. Rent a bike from the bike-sharing station

It’s possible to hear from locals that: “Bicycling, it’s a Ljubljana thing”. There are indeed great conditions for cyclists. Many roads have their bicycling lines, the city center is car-free and around the city several bike renting stations. In the streets, there will be a lot of similar bikes. These bikes are from the BicikeLJ bike-sharing system. It has 51 stations over the city, where bikes can be borrowed.

It’s convenient if staying longer in the capital and it wouldn’t break a bank when being only one day in Ljubljana. It has a yearly subscription for 3 euros. More information about bike-sharing is here. Keep in mind that a bike can be used only for one hour, if keeping it longer (longer than an hour), then it charges extra. But the good thing is that after the time is up, it’s possible to change a bike in the new station and one hour starts ticking again. In short, make sure that you aren’t with one exact bike for over an hour.

The most popular spot for Ljubljana hikes. It’s about 8 kilometers away from the city center, but well accessible by bike, car or public transport. A relatively easy hike starts from Šturmova Ulica and takes about half an hour to reach the summit. Šmarna Gora is 664 meters above sea level. Offering stunning views to the mountainous Kamnik and Julian Alps and also to the capital itself. At the top is also cottage houses, where every hiker can spoil themselves with food and drinks. From there you will see the beauty of Slovenia nature and outdoors.

When being overwhelmed with city noise, then city park is always a great place to clear your head off. Tivoli Park is the largest in the capital and is close to the centrum. There are places where you can just walk, do some sports, ride a bike or have a picnic. Many things to do in Ljubljana in one day.

14. Have lunch next to the Park Špica

The center of the capital and next to the Ljubljanica river has several restaurants or cafes to fill a belly when having regular lunch. When the city center has big traffic by strolling local people and tourists then some steps away Park Špica is a much quieter area. It’s a place where two river flows are connected. There you can have lunch at local cafes or have a picnic next to the river. Just pick one.

15. Be part of Slovenian Coffee Culture

It needs to be pointed out when wanting to experience the local lifestyle. Slovenians are one of the highest coffee consumers. When visiting one day in Ljubljana, then several coffee shops might hint at that. Slovenians are not like Italians who take their quick espresso and leave. They take it slow, having their toast and talking with companion hours. Maybe even a couple of times per day. There are several coffee shops around the city to start your day.

Where to stay in Ljubljana?

Hostel Tresor is in the heart of the city, just some steps away from Prešeren square. It’s listed among the most unusual hostels in the world, because of its style. Before it became a hostel in Ljubljana, it was home to the bank. For example, it has a spacious atrium, dining in a former bank vault. Like all the hostels there are multiple rooms from two to ten-bed shared rooms. A day in Ljubljana will be well spent if looking for something unique.

When looking for a more private and luxurious stay, Hotel Lev is a good option. It has many benefits like breakfast, sports facilities and it’s in the center of the capital. Many things to see and do around Hotel Lev. One of the most popular hotels to stay in Ljubljana.

Hotel Nox is a good fit when looking at something out of the centrum. Otherwise, it’s well connected with the centrum, so it’s easy to get there. Around there is a supermarket, a well-known hiking spot Šmarna Gora is also near. Hotel Nox is modernly designed, luminous, and in a quiet zone.

It’s harsh for Slovenia by judging it by only being one day in Ljubljana. Slovenia is something different when going outdoors and exploring the true beauty of nature. When hiking up to either Ljubljana Castle or Šmarna Gora, there you can see that it’s surrounded by mountains. Known as the Julian Alps mountains.

There will be plenty of options to do day trips from Ljubljana in one day to feel the fresh air. In only one hour it’s possible to visit magical Lake Bled or beautiful village, Kranjska Gora, with surrounding mountains or to the seaside to Piran. Everybody will be amazed by the nature of Slovenia.

Basic phrases to know in Slovenian

It’s always good to know some basic phrases in local languages. Everybody feels better when you can greet local people in their language. Also will be more respected by local eyes, because you have invested some time to learn basics in their language. Even when being only one day in Ljubljana. Here are some Slovenian phrases:

When there is a need to learn more foreign languages, then these travel apps are going to help to reach new heights.

Taking it all together!

24 hours in Ljubljana might pass by fast and the next day you have a feeling that there is a need for another day. Not because of the unseen landmarks, but that slow vibe, friendly and kind people, and small capital aura. Slovenia as a whole country is still a bit of a hidden gem in Europe along with the capital. Visit Slovenia it’s worth seeing with your eye!

Find A Place To Stay:

Save Money With Travel Cards:

Have A Trusted Travel Insurance: 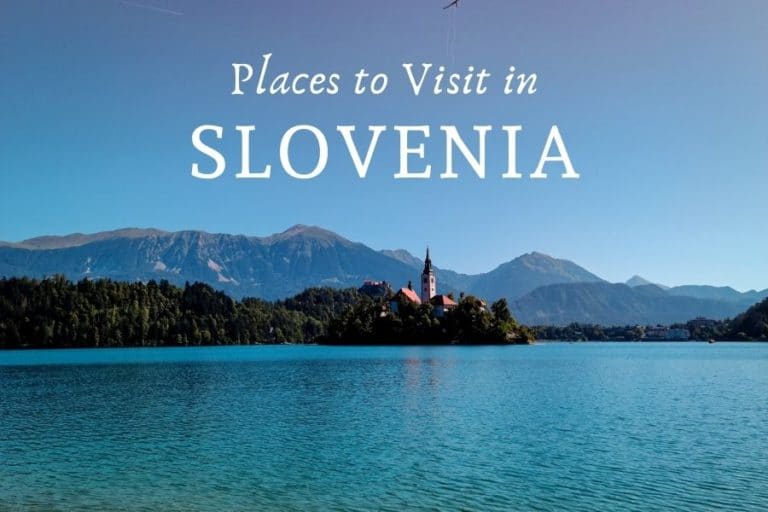 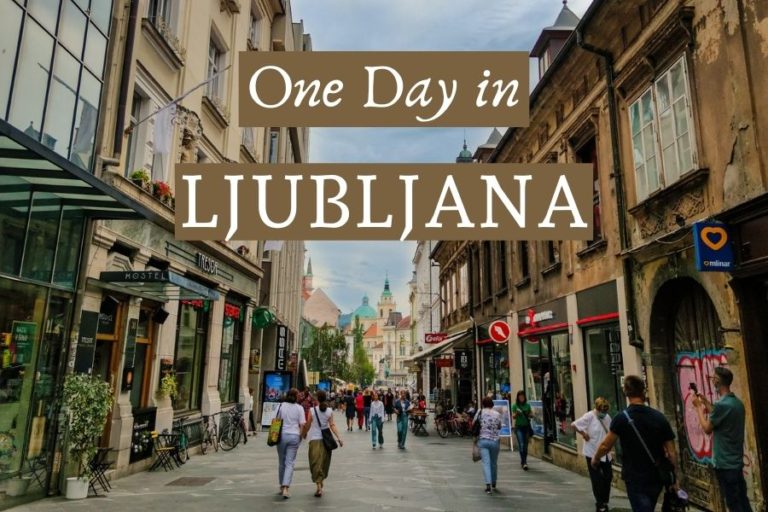 One Day in Ljubljana : 15 Things to do and see 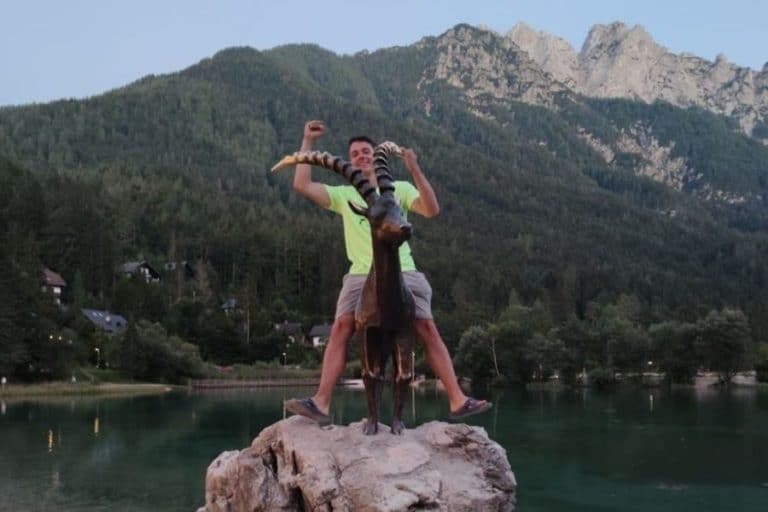