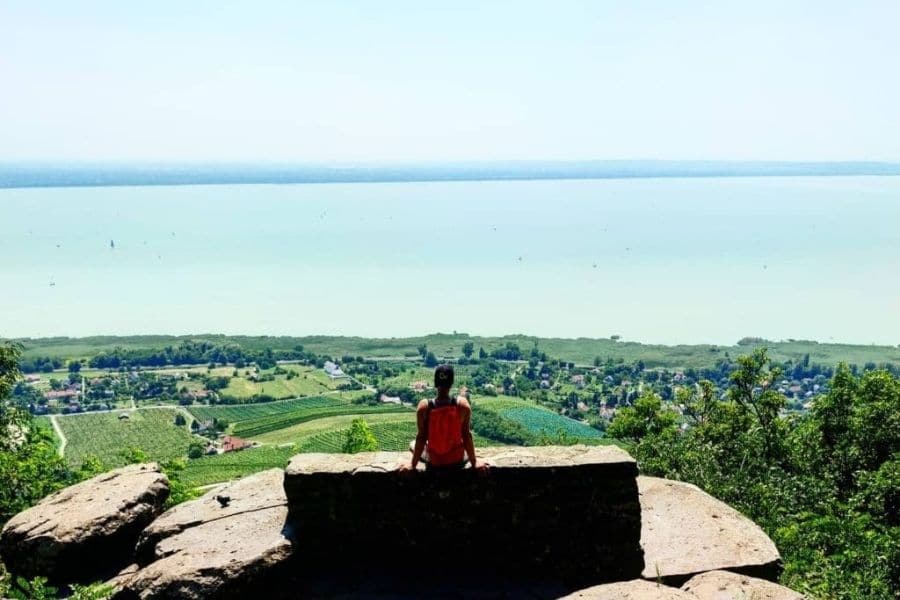 “I have been in Budapest for four nights and now is the right time to start moving forward again. Next spot: Lake Balaton”

This time I already knew my next backpacking Hungary trip destination – Lake Balaton.

It’s surrounded with different cities and villages what are well-known places for tourist from all over the world. But most likely you will meet Germans, local Hungarians, some Russians and of course other nationalities. It was my second time to visit this place and the reason why I did this again, it’s because I like lake Balaton (simple as that). The water looks so blue and it has endless sandy soil.

The first city from Budapest that I visited was Siofok (next to Balaton). I did make this choice just by looking at a map. It seemed to be a big city. After collecting information about Siofok, I got the picture –  It’s the Balaton´s party capital. Ohhoo, parties again… So off I went, this time I went there by train. It was for my budget backpacking trip the quickest and cheapest option.

What did I found there?

Lot’s of tourists from all over Europe. It’s also Balaton’s capital (when it comes to tourism). There isn’t anything particularly to see, only to buy things (to home) as a tourist. There were lot’s of markets, pubs, restaurants and other attractions what you could find from festivals. As I said it’s a party city and yes indeed there are lots of places where to party.

Also through thanks to the backpacking app CS, I found another traveller from Germany, who was there just to have a vacation with his friends. He told me that his parents had a party there about 40 years ago and now he’s doing the same. We had a good talk and he shared some great stories about his adventures. This guy has travelled a lot and with his enthusiasm, he showed that he have experienced a lot through his past travels.

Next two days I took some time off

Past two weeks I have walked at least 20 km every single day, so I felt my legs were burning. Plus the weather was pretty shitty.

I found a cheap hostel (obviously with wifi), so I used my time differently. I reflected back to my two weeks: how was my spending habits, collecting together some ideas about budget travelling. Also starting to find ways how to fund my travels and how to even more shrink my expenses in the future.

Is it a good idea to visit Siofok?

It depends on what your plans are. If you want to relax and also want to have parties, then it’s good to go. The prices might be a bit more expensive than overall in Hungary, but it’s still pretty cheap to have a vacation there. There are lot’s of families, so maybe it’s good to go when you have kids. If you want to party then Budapest is nearby. But Balaton offers so many relaxing opportunities. It’s your choice.

After three nights in Siofok, I felt it was enough for me and it was time to continue my solo backpacking adventures. I kept moving to the south but I still stayed close to Balaton. I took my backpack and walked to the main ferry port. It was about 10 km walk and I reached to the port where a small ferry with 8-minute ride took me another side of Balaton.

Now I was in the area, where many people told me that it’s the most beautiful place on the side of Balaton – Tihany

It’s like a peninsula and indeed it looked decent. Tihany as a city milieu is very gorgeous. There were many small cottage houses, amazing views to Balaton from the top of the castle. In overall hiking trails around the city offered some scenic views.

Weather was great all day and even in the night. This time I didn’t have any place to stay, so I did outdoor sleeping. When I first arrived at the Tihany I hid my big backpack to the forest, camouflage it and only took 1/10 bag essentials with me. That way I had a lighter bag to carry and I was able to move faster. It was a great idea to take a smaller backpack with me, when I was planning a backpacking trip.

I looked around the city, hiked and also searched for the place to stay. I did find a decent place to stay a night. It was up on the hill, right next to the monuments and it was really near to the town centre. With a knife in my hand, I had a safe wild camping sleep.

Sunrises are really early in the morning

I woke up early. Set my sights to the south and tried hitchhiking in Hungary for the first time. I would say that I was really lucky and I reached to my destination (Revfülöp) really quickly. It’s also next to the Balaton and there I had some beach time. Hiked again and in the evening I “found” the city centre. It was full of local people and tourists with lots of pubs, bars and a mule. At the Friday night, there was a free jazz concert – I enjoyed that for a while. That night I stayed in the local hostel where was also a live concert.

Saturday I had big plans and many places to visit

I took off from Revfülop. Started hitchhiking again. First, I was picked up by the previous hitchhiker, who told me that he travelled this way in Asia for 1,5 years. So he knew the struggle. I hit my first destination and driver knew the exact place where to stop me. Thanked him and then I was at the bottom of the mountain… It was time to start climbing.

Mountain was located next to Badacsony. Bakony-Balaton Highland is known as the volcanic area. There are many volcanoes that look-alike mountains. Also, it’s the best place to grow grapes and theses are ingredient materials to make wine. Indeed there were lots of wine regions.

I took a longer hiking route and then I wanted to get rid of my big backpack. Hide it into woods and camouflaged it. The feeling were much lighter and I was ready to go. I hiked for about 3-4 hours. There were many routes and I found one secret track for better views to volcanic mountains. It needed some climbing but it wasn’t that dangerous.

After that, I wasn’t done with climbing and I already had another place in my head.

Thumb up, smile and with fast hitchhike, I reached to my spot. Now I explored Szigliget fortress. It was again next to the Balaton. Again views were truly amazing.

It’s already evening, what next?

I decided to experience something new every week, now I had a chance to be “workaawayer” in a host family. I´m going to talk about it more next week. So I set my sights to my next week’s’ host place. It was about 30 km away and I was quite confident that I will reach there fast because so far I have had great luck with hitchhiking. I did a pretty good start with that in the beginning.

After first hitchhike I reached to a bigger road but cars had no chance to stop. High traffic. So I walked about 7 km and then I hit to a smaller road, to village roads. It started to get dark.

Luckily I reached the first village. From further away I saw that there seemed to be a little party. One great benefit of solo travel is that you might be invited to the party. Indeed the main party host stopped me and invited me to have some food and drinks. Obviously, I was down with that and I had some good time with the locals.

I promised to my host that I will reach there soon, so I had to continue my walking. It was already dark and it was super hard to hitchhike (there weren’t that many cars as well). I walked about 6 km, passed by several cars and then one car stopped. Even though they lived in the other village they took me to my destination.

Lake Balaton isn’t that deep. You have to walk a couple of meters to get deeper water. But at the beginning of the lake, it’s good to play games like volleyball, basketball or anything else what is possible to play on 1 m water depth. The average depth is 3.3 meters and a maximum depth is 12.2 meters. When you jump make sure that it´s deep enough.

After long day, I made it

So finally…It was really dark and I reached to my destination. I was totally exhausted, but I was still able to talk a few words with my host family. My first solo travel experience as a volunteer starts!

What I’m going to do here and why I’m doing it? You are going to find it out on next week blog post.

Want to get to know more about Lake Balaton and it surroundings? Here is more information.